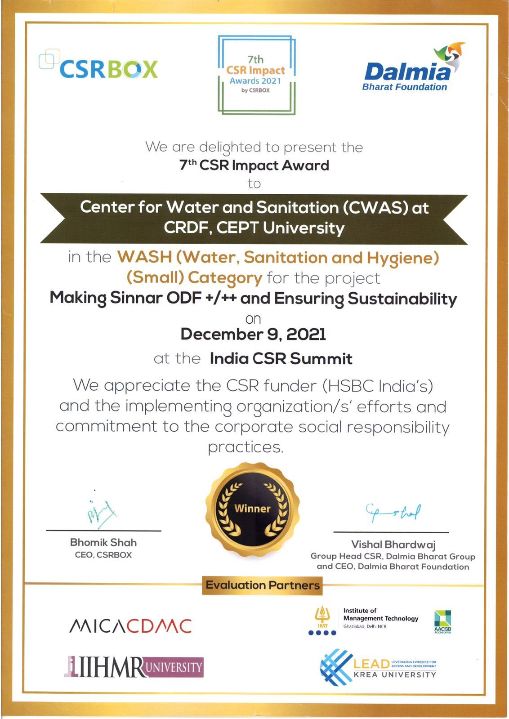 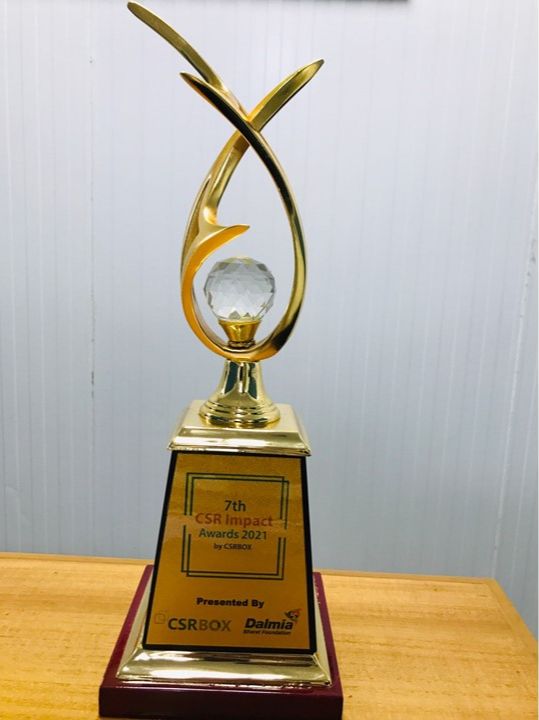 The CSR Impact Awards is an initiative of CSRBOX with support from Dalmia Bharat Foundation . These awards aim to encourage companies, CSR foundations and CSR implementing agencies to deliver high impact through CSR projects. For the 7 th CSR impact awards, Center for Water and Sanitation (CWAS) received award under the WASH (Water, Sanitation and Hygiene) (small project) category for its project “Making Sinnar ODF+ and ensuring sustainability” supported by HSBC.

The Evaluation partners for this award were MICA-CDMC (formerly known as Mudra Institute of Communications, Ahmedabad), Institute of Management Technology, Ghaziabad (IMTG), LEAD at Krea University and IIHMR University. The overall approach and outcomes of the project on institutional sustainability and inclusion were well appreciated by the jury members. 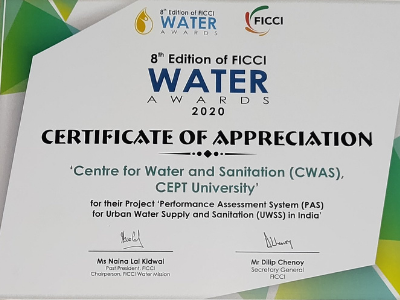 CWAS’s Performance Assessment System (PAS) for Urban Water Supply and Sanitation in India was recognized by the Federation of Indian Chambers of Commerce & Industry (FICCI) during the 8th edition of FICCI Water Awards on 16th February 2021.  CWAS received a "Certificate of Appreciation" in recognition of the project. 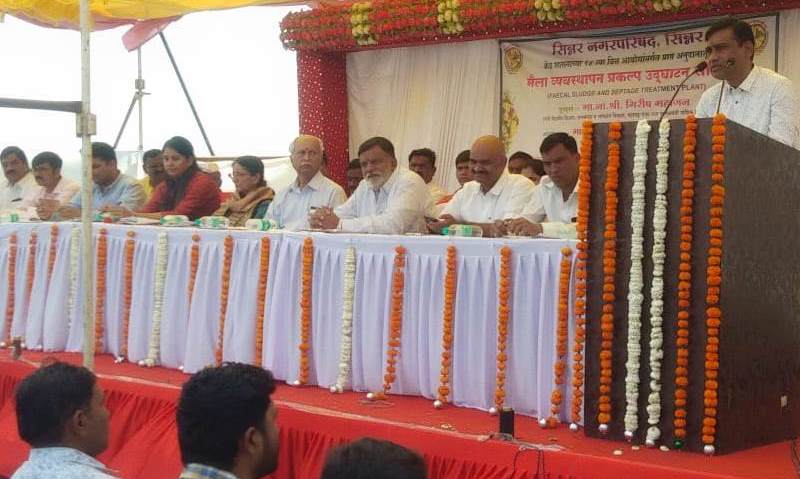 On 3rd of March, 2019, the city of Sinnar inaugurated its newly constructed FSTP and moved one step closer to becoming ODF++. Along with this the city began scheduled emptying operations for septic tanks in the city and also inaugurated school toilets for children. CWAS has been a long term partner to Sinnar Municipal Council for designing and implementing the city’s sanitation programme. For this support, CWAS team was felicitated by the Municipal Council at the FSTP inauguration event. 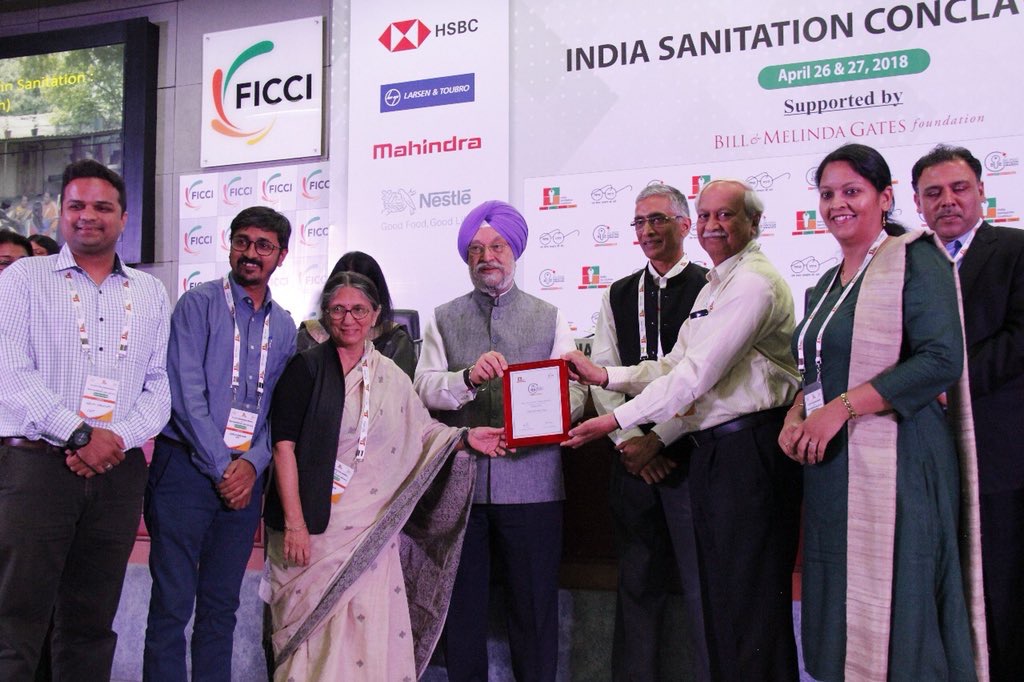 The ISC-FICCI Sanitation Awards recognise excellence in sustainable sanitation. In this year’s edition, the C-WAS team from CEPT received an award for "Best Non-Profit Engagement Model in Sanitation" at a ceremony held on April 27, 2017 at FICCI in New Delhi. The award was given to CEPT by Hon. Minister of Housing and Urban Development, Government of India. The award was in recognition of C-WAS work in supporting the cities in Maharashtra in becoming ODF and moving towards ODF+. This work has been done under projects supported by grants from BMGF and HSBC.

On October 1st 2017, all 384 urban local bodies of Maharashtra were declared ODF. At an event organized by Government of Maharashtra, the Hon. President of India, Shri Ram Nath Kovind felicitated CEPT team that has been supporting the Swacch Maharashtra Urban Mission for the past two years. Professors Meera Mehta and Dinesh Mehta received the felicitation on behalf of CEPT. The Hon Governor of Maharashtra, Shri C.V Rao and the Hon Chief Minister of Maharashtra, Mr Devendra Fadnavis released a booklet outlining the journey of making urban Maharashtra ODF. CEPT and its partner AIILSG supported preparation of this booklet.

Recognition by IWA for International Development Award to Dinesh Mehta: For Research in 2013

The FICCI Water Awards recognize excellence in water conservation and sustainable water management practices. The 9th edition of the awards were conferred during the India Industry Water Conclave organized by FICCI during 2nd and 3rd March 2022. CWAS was awarded in the in the Urban Wastewater Management category for work in Wai and Sinnar cities where CWAS has been supporting the municipal Governments and actively working on projects since 2013.
Award winning case studies have been compiled into a Compendium of Best Practices which exemplify water use efficiency and sustainable water management. 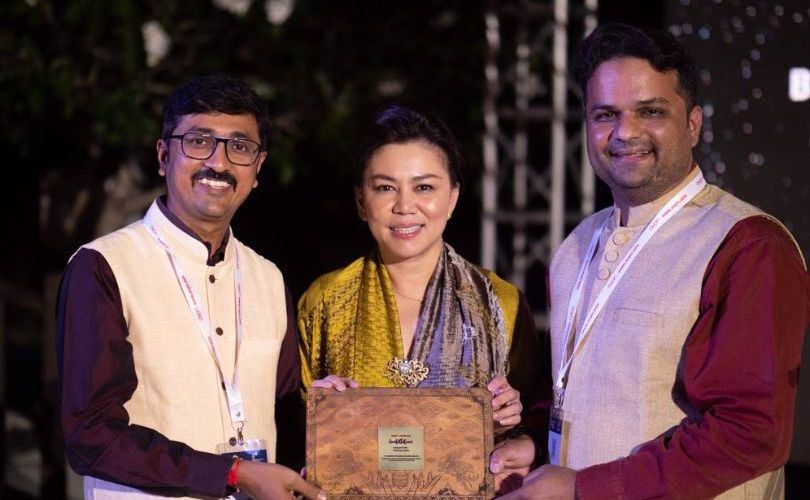 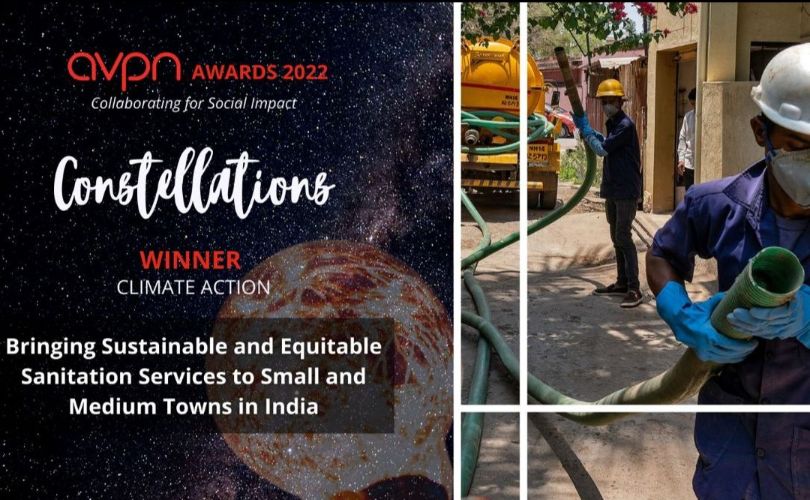 CWAS received the AVPN Constellation award in Climate Action category at the AVPN Global Conference, the world’s largest networking event for Social Investors in Asia. The Asian Venture Philanthropy Network (AVPN) consists of 600+ members from across 33 countries working in the social sector in Asia.  The award was conferred for CWAS’s work on faecal sludge and septage management in the cities of Wai and Sinnar. The work was supported by BMGF and FCDO (formerly DfID).

Membership of National and International Committees

CWAS is a part of the NFSSM Alliance, and leads the task force on ULB-Strengthening

Meera Mehta - Member of the Advisory Board of the USAID funded global program on Urban WASH, by Tetra Tech, USA (since 2022)